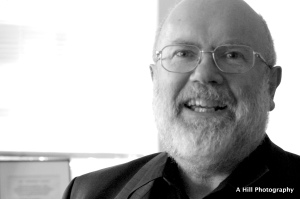 Baritone David Pimm grew up in London, England and sang as a boy treble. Following an early voice break (at 11), he did not sing for another thirty years. David returned to choral singing in his early forties, singing first with the Open University choir in the UK and then, following his emigration to Canada in 2000, with the Richard Eaton Singers in Edmonton for a decade. Upon moving permanently to Vancouver in 2010, David sang with Peter Butterfield’s Vancouver Voices (as well as its sister choir, the Victoria Philharmonic Choir) and, subsequently, with Darryl Nixon’s Oratorio Singers. Singing with the Postmodern Camerata is his first chamber choir experience.