The Postmodern Camerata Society, under the direction of Dr. Greg Caisley, is a group of professional musicians from Vancouver, British Columbia, who are dedicated to performing Cantate and chamber music by J. S. Bach and other composers. The group gave its first series of performances in the spring of 2014, and had great success during the 2015-16 season performing works ranging from Handel’s Dixit Dominus to Jocelyn Morlock’s Lacrimosa, from Mozart’s Cosi fan Tutte (abridged) to Lux Aeterna by Ligeti. Our third season featured works from America in October, an exploration of England in March, and three world premiers in May.

The fourth and fifth seasons were extremely successful with a wide range of musical performances, including cabaret classics, Dido and Aeneas among many others. As we head into our sixth season, we are excited to discover works by Canadian composers Thomas Beckman and James Rolfe, as well as works by Bach, Durey and Ravel. Learn more about our performances here, or listen to our music here. 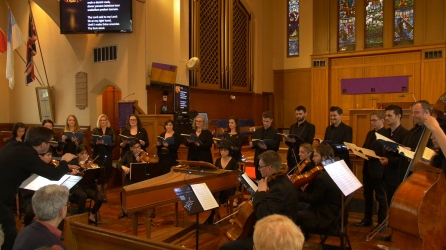 Click here to find out more about the musicians involved with the PMC.