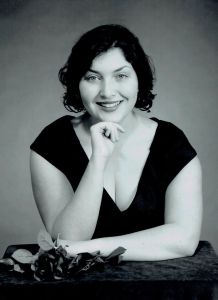 Canadian mezzo-soprano, Sasha Kaye, holds a Bachelor’s degree from the University of British Columbia, where she completed a double major in Voice Performance and Psychology. She performed with the award-winning University Singers from 2011 – 2015, during which time she joined the Vancouver Symphony Orchestra in their performances of Benjamin Britten’s War Requiem and Beethoven’s Symphony No. 9. Sasha had her soloist debut with the University Singers in Handel’s Messiah in 2013, and she has performed under some of North America’s most renowned composer-conductors, including Stephen Chatman and Eric Whitacre. Her recent performances include UBC Opera’s production of La Traviata, the Vancouver Orchestra Club’s Canadian premier of Christopher Tin’s “The Drop that Contained the Sea”, and “Classics and Disney Classics”, a touring production of classical and musical theatre repertoire in the BC interior.
Sasha regularly performs as a solo recitalist in North and West Vancouver, where she delights in sharing her love of Art Song with the community. Sasha is thrilled to be performing with the Postmodern Camerata in their 2016/2017 season; in the future, Sasha hopes pursue a Master’s degree in Voice Performance.